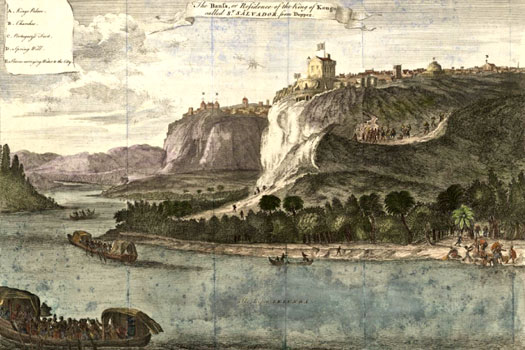 Territory already populated in prehistoric times as evidenced by remains found in the regions of Lunda, Congo and the Namibe desert, only thousands of years later, in full proto-history, people get more organized. The first to settle were the Bochmanes – great hunters, pigmoide height and clear, brownish color.

In the early sixth century AD, more evolved people, black, technology inserted in the Age of Metals, undertook one of the greatest migrations in history. They were the Bantu and came from the north probably the region of present Republic of Cameroon. These people, when arriving in Angola they encountered the Bushmen and other more primitive groups, imposing their own technology in the fields of metallurgy, ceramics and agriculture. The installation of the Bantu over many centuries, generating several groups that would establish themselves as ethnic groups that have lasted to this day.

In 1484 the Portuguese landed in Zaire, under the command of navigator DiogoCão, starting this March the Portuguese began to gain not only Angola but Africa. Already installed the first major political unity of the territory came into history as the Kingdom of Kongo, the Portuguese established alliance. The Portuguese Colony of Angola was formed in 1575 with the arrival of Paulo Dias de Novais with 100 families of settlers and 400 soldiers. Paulo Dias de Novais was the first Portuguese Governor to come to Angola, which had as its main activities exploit the natural resources and promote the slave trade (slavery), forming a large market.

After 1764, a slave society, it moved gradually to a caring society in producing it consumed. In 1850, Luanda was already a great city, full of commercial firms and exported together with Benguela, palm and peanut oils, wax, glue, wood, ivory, cotton, coffee and cocoa, among other products. Corn, tobacco, dried meat and cassava flour also begin to be produced locally. It was born the Angolan bourgeoisie.

In 1836, the slave trade was abolished and in 1844 Angola’s ports would be opened to foreign ships. With the Berlin conference, Portugal found itself obliged to effectuate the immediate occupation of its territorial colonies. The territory of Cabinda, north of the river Zaire, was also given to Portugal, thanks to the legitimacy of the Protectorate Treaty of Simulambuko signed between the kings of Portugal and the princes of Cabinda in 1885. After a slow and complicated, the late nineteenth century would mark the organization of a colonial administration in direct relation with the territory and the people to govern. In economics, the colonial strategy was based on agriculture and the export of raw materials. The trade of rubber and ivory plus the revenue from taxes imposed on populations, generated large profits for Lisbon.

The end of the monarchy in Portugal in 1910 and a favorable international situation would lead the new reforms at the administrative, agricultural and educational. In economic terms, begins the intensive exploitation of diamonds. The DIAMANG (DIAMOND COMPANY OF ANGOLA) is founded in 1921, but operated since 1916 in the Luanda region. With the state that has extended to the colonies, Angola is now more a province of Portugal (Overseas Province). The current situation was apparently calm. In the second twentieth century of the cartel, this peace would be undermined with the emergence of the first nationalist movements. Starts the formation of political organizations from more explicit of the 50 that were organized in a way making heard their cries. Promote diplomatic campaigns worldwide, fighting for independence.

The colonial power would not yield, however, the proposals of the nationalist forces, causing the onset of direct armed conflict, the “Armed Struggle”. Highlighted in the “Fight”, the PMLA (Popular Movement for the Liberation of Angola), founded in 1956, the NFLA (National Front for the Liberation of Angola) was revealed in 1961, and NUTIA (National Union for the Total Independence of Angola ) which was founded in 1966. After long years of war the country achieved independence on 11 November 1975.

After 27 years of Independence and 41 years since the beginning of the armed struggle, this is the Peace is finally consolidated in April 4, 2002 by the agreements signed in Luena, Moxico. NUTIA 80,000 soldiers lay down their arms and are integrated into civil society, the Angolan Armed Forces and National Police. The NUTIA is transformed into a political party, has a role in the democratic life of the country. The National Reconciliation and the Process Development and Reconstruction Plan is for the Head of State, José Eduardo dos Santos, the main objectives of peace finally achieved in 2002, after long years of struggle and negotiations.

Since 1992, the first general elections, multiparty democracy ruled Angola. The PMLA together with NUTIA and other political forces in parliament, managed masterfully to rebuild a country of more promising future for all of Africa, however, paradoxically with its natural wealth still live a very harsh reality. As part of an extensive program pushing Angola to modernity, progress and wealth, new elections were held in 2008. The PMLA, which has always ruled since independence, has retained a national identity. They were both presidents of PMLA that Angola has so far had. The first, the founder of the Angolan nation, Dr. AgostinhoNeto and the second and current President of the Republic, Jose Eduardo dos Santos, who became, during his investiture in 1979, the youngest president in the continent. On the international scene, Angola has been giving strong support to initiatives promoting peace and resolution of regional disputes, favoring diplomacy in conflict prevention and the promotion of human rights.